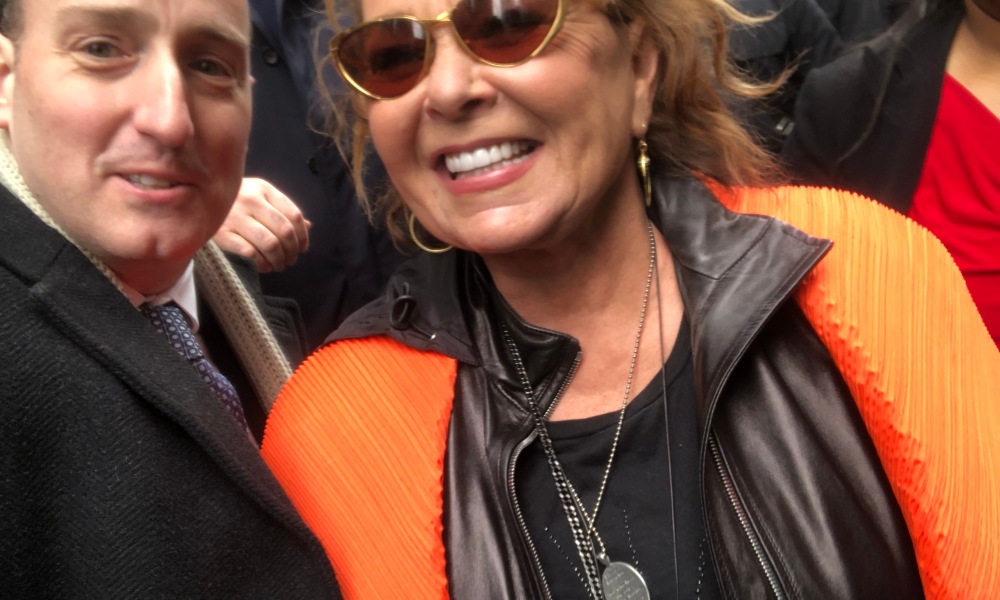 CelebriTuesdays: I missed out on Dan, but got to meet Roseanne! 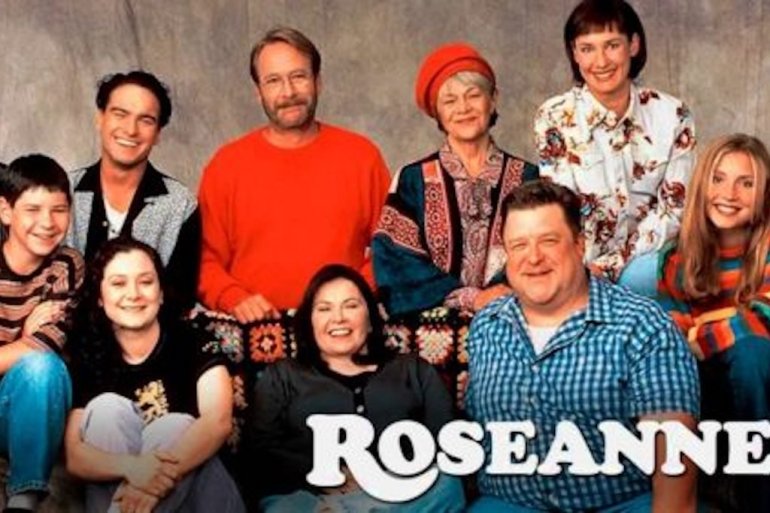 Last week, I shared my encounter with the fantastic Sandra Bernhard which was perfect timing since the revived Roseanne season was starting tonight, when low and behold Howard Stern was interviewing the Roseanne stars this afternoon. I was anxiously waiting for Roseanne & John Goodman to come down and hopefully snap a picture with me since I’m big fan. 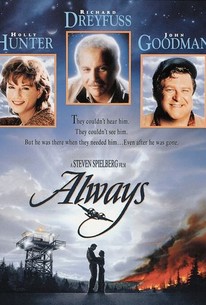 I’ve seen a lot of celebrities, but I was super excited about meeting them – she’s like that crazy aunt everyone wants and loves, but you’re still somewhat scared of what she’ll do at the family reunion and I’ve been a fan of everything he’s done since Always! 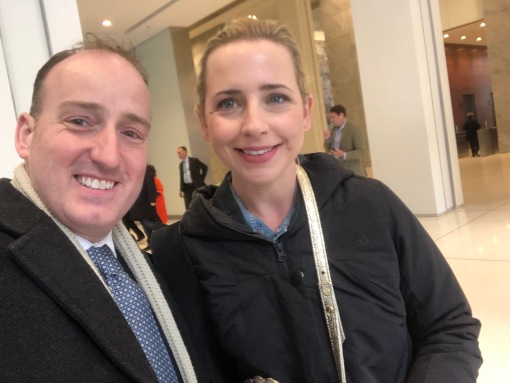 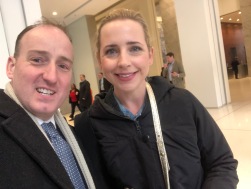 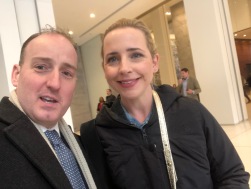 Lecy Goranson (Original Becky) came out first and was snapping pictures with other fans in the lobby so I went right over. I told her I was excited for the reboot to start and she said she hoped I liked it. As I was wishing her luck with the show, I looked over to see Roseanne and John Goodman walking towards the door. It was my very own Sophie’s Choice as they split up and headed towards different exits – there was just no way to get both of them.

I love John Goodman, but Roseanne was closer to me and I felt like I had a better shot of actually getting her, so I jumped into action using my ninja-stealth speed. OK – I actually just walked over towards where she was heading, but it was at a brisk pace and still felt very Mission Impossible-ish!

Roseanne’s assistant was shooing people away and said “no pictures” and that Roseanne wouldn’t sign any autographs. I looked over and plotzed because John Goodman was taking pictures with everyone at the other door, but I knew he was too far away now so it was Roseanne or nothing. I was right next to her now and all that stood between her and I was that damn assistant who was no-nonsense as she tried to quickly shuttle her to their waiting car. 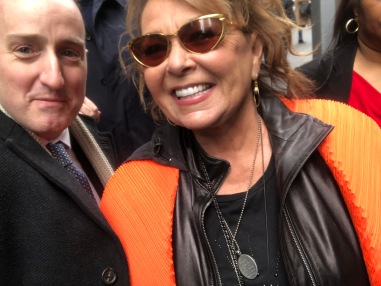 As luck would have it, Roseanne’s assistant actually brought her to and opened the door of the wrong car; she actually opened the car door that Lecy had just gotten into. This little snafu caused a short moment of confusion and that moment was my small window of opportunity. I hustled around her assistant and got on the other side of Roseanne once again using my previously mentioned stealth-like ninja speed. I asked Roseanne if I could take the picture and she didn’t answer – full disclosure, it was a little bit of a commotion with the crowd and her assistant leading her to multiple cars through the crowd. I asked again since I’m not an animal and felt it would be extremely rude of me to just jam my phone into Roseanne’s face and start snapping pictures. Also, she’s crazy and could have slugged me which would have been even more awesome! 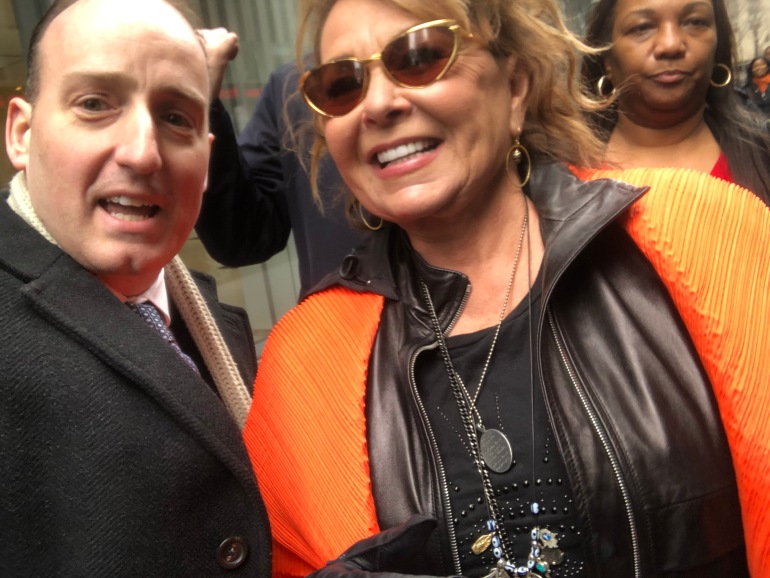 OVER HER RIGHT SHOULDER IS THE WOMAN WHO DID NOT WANT US TAKING PICTURES.    SHE TRIED TO KEEP US APART BUT WE FOUND A WAY!

I asked once again – which at that point was even irritating to me as well – and she looked at me and said what could have been a sarcastic line right from the show “Well, why don’t you just take it already?’” and then she started laughing. It wasn’t her famous cackle from the show, but it’s not like I was tickling her or had told her how my sister shit on a cat; either way she still laughed at me. Drop the mic now because Roseanne laughed at me! Granted, she was laughing at me, not with me, but I’ll take what I can get. She got into the car and was gone in an instant and I wans happy as a pig in a poke. (Not really sure exactly what that expression actually means, but I was pretty stoked). 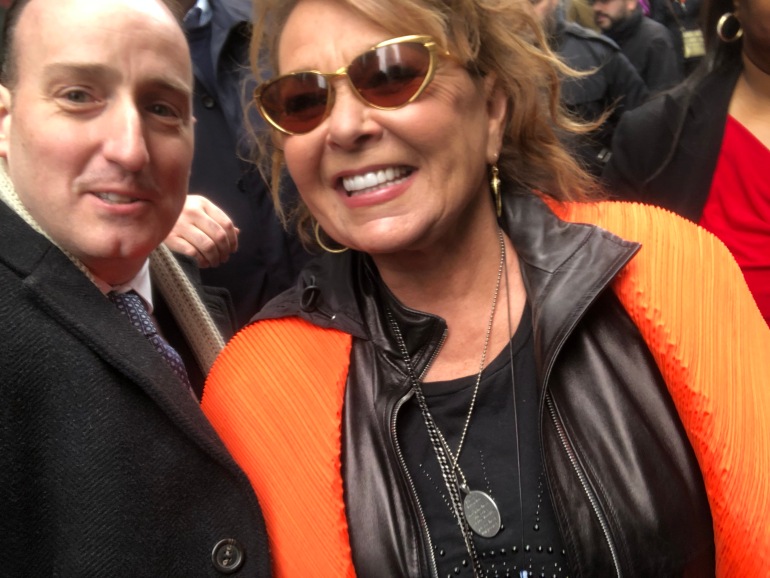 I didn’t get to meet John Goodman today but I’m happy that I at least got to see him in person. I got to meet and get pictures with Becky and Roseanne so, all in all, it was a really good day – but mark my words, I will meet you one day John Goodman! Like Scarlet O’Hara extolled in the classic Gone with the Wind “As God is my witness, I will never miss a picture with John Goodman again!”