Last week, I gave you some insight into my twisted brain and a little background into some really embarrassing things that have helped to shaped me. In getting some feedback from that post, I couldn’t help but think of a close friend’s experience. If you’ll indulge me that courtesy, I thought that I might share someone else’s Ah-Shit moment too!

Let me just say that talking about shitting is risky territory to enter. I purposely waited to talk about it because I wanted to ease into the shitting stories – sort of like a slow seduction…If that doesn’t paint a nasty picture in your mind – nothing will, so on with it. When you tell people about your shitting experiences their reactions tend to be one of two types: A) the mock offended who pretend that their shit “literally” doesn’t stink, and that they have never discussed shitting before and will not start now or B) the empathizer who knows exactly how you feel because they may not have shit their pants recently, but the look on their face tells me that they’ve come close. I’m not asking you to tell me which type you are below in the comments section, but in honor of spastic colons everywhere – here we go.

One important note -In keeping with my tradition of only humiliating myself here, I will not give away this person’s identity and will refer to them from here on out as Carlotta. What I can tell you is that Carlotta is a woman and that Carlotta is not a cat lover (That might seem insignificant right now, but read on.) 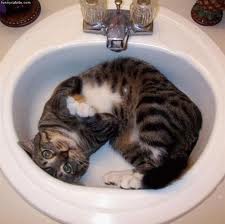 and there I was just minding my own business...

When Carlotta was on her way to court for an accident she got in, her stomach started in with that all too familiar gurgling. That’s never a welcome feeling, but more so when you’re driving – one wrong sneeze and you’ll never be able to carpool again. As she was driving, she came to the realization that she wasn’t going to make it there in one piece, so she veered off the highway and headed toward her friend Cher’s house.

As she was pulling into the driveway, she could tell that the situation had reached Defcon Three. She threw the car into park, sprinted through the yard towards the front door and blasted in the screen door. When you enter Cher’s house, you walk through the living room and straight ahead about fifteen feet to the bathroom door. On a normal day this is no big deal, but on this particular afternoon it was like the long walk to the electric chair. Carlotta ran for all she was worth and screamed something similar to “get out of the way” to Cher upon entry into the house, but it was so fast and jumbled she couldn’t really be sure.

She made it into the bathroom, shut the door, dropped her pants and was about to park it on the porcelain when all of a sudden, there was a commotion. Cher’s cat Pretty spent most of its time in a litter box next to the toilet and had been sitting on the toilet when Carlotta burst into the room. She shooed the cat off the toilet and tried to sit down when the cat got territorial and leapt back onto the toilet. The loud screech of the cat had an unexpected effect that no one saw coming: It literally scared the shit out of Carlotta and she screamed “Pretty, NOOOO!!!

Hearing the commotion outside the door, Cher got concerned: (although it’s unclear if she was concerned about the cat or Carlotta)

Carlotta:  “I need you to get me a pair of sweat pants, some paper towels, and whatever it is that you use to clean Pretty with!”

Cher: “What? Pretty’s a cat – she washes herself…”

Carlotta: “Not today Cher, not today…”

In case I haven’t made it very clear – Carlotta shit all over the cat!!! Pretty was covered, although she did tell me that it did come off of her fur very easily…(Carlotta told me that, not Pretty) She came out of the bathroom and called the court to see if she could reschedule and the lady on the phone asked what happened.

Carlotta: “I had an accident.”

Carlotta: “Not that kind of accident.”

Lady on the Phone: (realizing what she meant) “Oh my God, hold on…

They did feel bad for her and let her come back the next day. I usually don’t do this, but I actually called Carlotta to make sure that I was remembering the story correctly, not just to find out about the poop’s trajectory…When I called Cher’s husband to ask the cat’s name because I couldn’t recall it, he couldn’t remember it either. Really? How do you forget the name of your pet cat or your pet cat that someone shit on? The cat’s name was Pretty! She shit on Pretty cat but I’m pretty sure he was more like scaredy cat after that.

A more immature person might tell you that isn’t how you treat a pussy (cat), but I’m above that. I don’t need to stoop to such levels. What I will tell you is that for this very reason, my dog has never been left unattended whenever Carlotta is around and that this isn’t the first time that Carlotta has had airborne poop. Granted, the last time it landed on a wall and not a living pet (she did that two different times, believe it or not) but it was still airborne. She was sick and mistakenly chose the wrong door when she gave the vomit priority in the toilet at the expense of her explosive posterior and the white wallpaper. Talk about a houseguest and a visit you’ll never forget. The other time she shit on a wall was at was at a softball game when she was younger, but it still seems like a pattern is developing…Thoughts?

She's coming back over???

32 thoughts on “More Ah-Shit Moments: The Pretty Kitty got all Shitty!!!”