A Stain by any other name…

As I heard about this crazy story and it randomly made me think of my college friend Weezie and her “guy.” Nothing as tragic, but you’ll see the connection…But first – let me tell you that this is the exact reason I will not commute without my Imodium AD!!!

I know that in college that it’s a different world and you live by crazier standards than you do in real life, but banging someone named “ShitStain” is sort of like watching the Wendy Williams Show sober – it’s never a good idea! He was a great guy and all, but it didn’t matter – his name was “Shit Stain.” 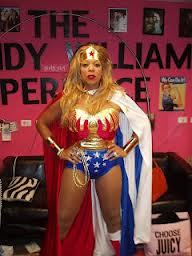 Wendy Williams is a Wonder allright!

If you were to ask Weezie, she’d tell you he looked like Brad Pitt, but I think he looked more like Nat from The Peach Pit. I’m not trying to be mean here, but they weren’t even officially dating so it is hard to know what to call them; I’ll just say they were “friends” and leave it at that. I liked him, he was a cool guy. My question was never about him or his looks or anything – it was his name. Hear me out: I am not one to normally pry about anyone’s nighttime fun – but I couldn’t help but ask: What did she say during the sex? Seriously, what do you yell out when you’re having sex with someone named ShitStain?

“Give it to me ShitStain”

“Me love you long time ShitStain”

“If this stain’s a rockin, don’t come a knockin” 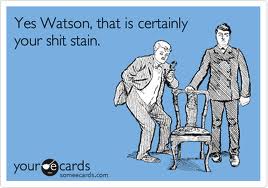 I’m sorry to report that there was no happy ending for the two of them and the relationship didn’t progress to the point of registering for linens monogrammed with ShitStains, but I did I see him once after Graduation. I was up at the Fat Camp when I randomly saw him walking with his mother in the mall.

As I walked over, I yelled out “Hey ShitStain, What’s going on?” to painful looks of confusion on his mother’s face as if she didn’t know who I was talking to. She was looking around side to side as if there might be two ShitStains in the mall at the same time. It was then that I realized that I didn’t actually know his real name and she apparently didn’t know his stage name. OK, so it was his Fraternity name and not a stage name, but does it really matter? His mother was like:

“What did you just call him? That’s not his name!”

“Really? I don’t picture you as a John…”

She turned to ShitStain “Why did he just call you that? How do you know him?”

“What?” I said “Everyone calls him ShitStain…” It’s not as if I would walk up to strangers calling them ShitStain for no reason…

“Who calls you that John? Why do they call you ShitStain?” she questioned as they walked away…Not really much of a question if you ask me…I never actually asked him why, but I always had a pretty good idea of how he got that name…

Once again, open mouth and insert foot! I can only imagine that car ride home…

“John, I’m telling your father that people call you ShitStain…”

And this one time, at Fat Camp..., College Stories, My Crazy Friends, No One To Blame But Myself..., Too crazy to classify