The Sea was angry that day my friends – My Costanza moment finally arrived!!! 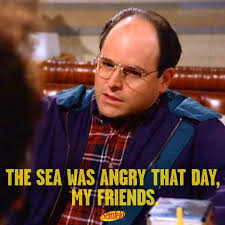 I normally try not to drag my wife into my crazy stories on here, but this time I just couldn’t resist! We went away to celebrate her birthday without the kids for the very first time since they were born and it had the makings of a fantastic getaway; that is until the universe pulled out an ironic twist of fate to remind me that “I am Costanza, Lord of the Idiots!” 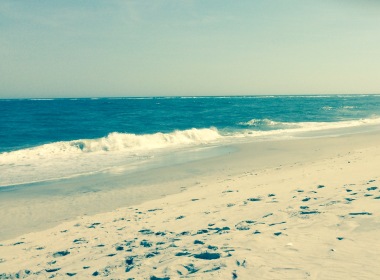 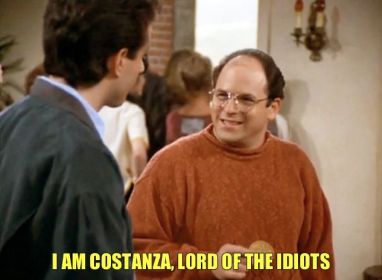 Let’s be honest – this has been the worst winter in a long time, and she’d been so looking forward to getting away to the beach, that I was afraid she might make a run for it and swim out to join Ariel the second she saw it. As we parked and walked through the sand, there was no one around. When I say there was no one around, I mean it was deserted. Obviously, early April isn’t beach weather, but it was finally a really nice day after a long crappy streak of dismal days and wasn’t too cold to be down by the water, so we were surprised to find it empty. As it turned out and we’d later discover, there was a small group of other people, but I’ll circle back to them in a minute. 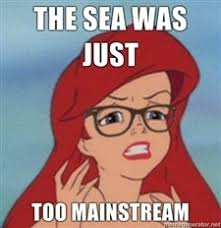 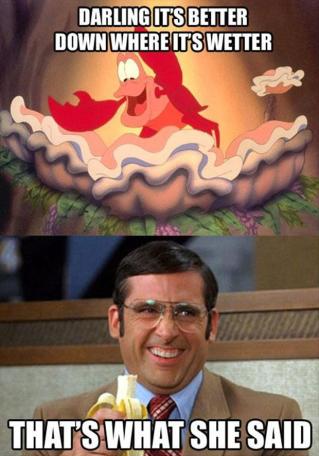 My wife LOVES the beach and was so excited to see the ocean, so as soon as we arrived we went straight there. She’s part mermaid and was born and raised on the ocean, whereas I’ve been hiding in the shade my whole life like a vampire. The beach isn’t something I particularly care for (come on, you’re literally sitting in dirt!), but since it was her birthday and my wife stays home, raising our kids and working one hundred times harder than I ever do at my job, I was determined not to spoil it for her. Little did I know what we were in for…? 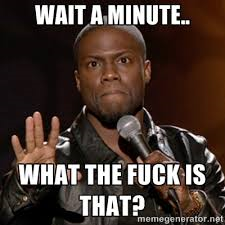 As we walked down through the sand, I could see the sheer joy on my wife’s face and her big smile was so contagious that I just looked at her sheer happiness and thought “what could be better than this?” Then I stopped and squinted – trying to make sense of the sight in front of us. I was squinting and confused, until I realized and gasped – because I thought I was hallucinating: “What…the Fuck…is that?” I shouted and she stopped dead in her tracks. 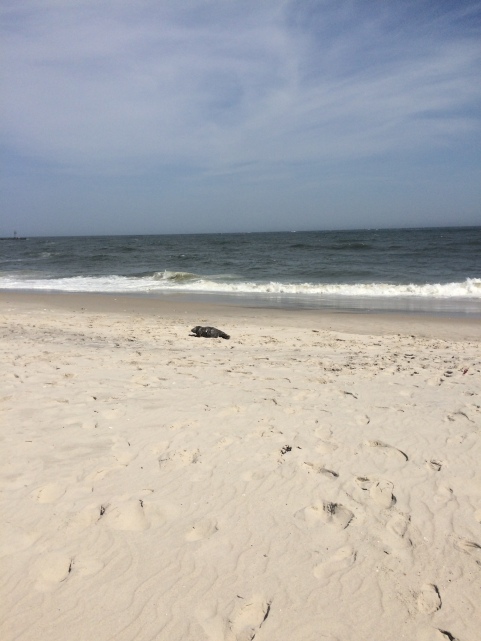 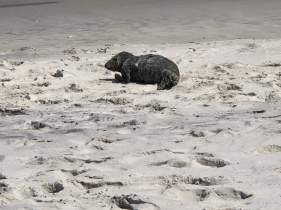 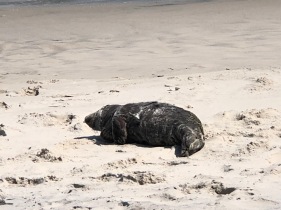 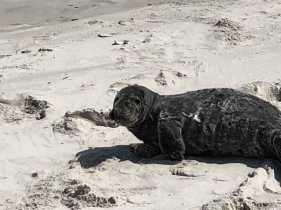 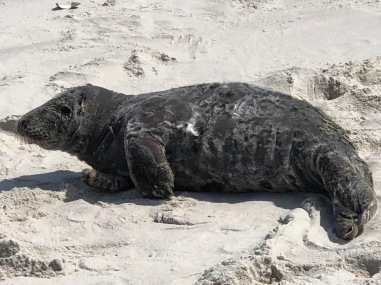 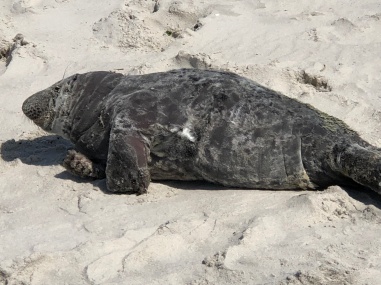 I couldn’t tell if it was a tree trunk washed ashore until I saw it moving, but right there sprawled out before us was not the Kissed by a Rose dude that snubbed me a few months ago, but an actual living, breathing, seal! We thought he might be out there sunning himself at first, but from the noises and restricted movements it was making, we could tell it was in pain. We were shocked to see it, but even more shocked to see the group of Mennonite women playing ball next to it as if it were part of the game. Forgive me for not staying current on all the games these kids are playing now, but common sense should take over and tell you not to put your slam ball or you corn hole that close to a dying seal! It was like they were waiting for him to tap in and play. 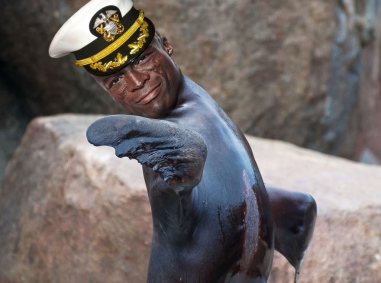 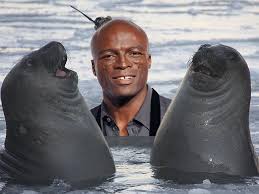 I couldn’t tell for certain if they were Amish or Mennonites or the cast of The Handmaid’s Tale out there in that garb, but what I could tell is that they were definitely idiots. We were like “did you guys call the police?” and they were like “for what?” It was almost like a hidden camera how because there’s no way they didn’t notice it… it was right then that I knew that I’d have to be the Marine Biologist on the shore that day! My whole life had been working towards this moment and I was determined to fulfill my Costanza destiny and save that seal! I rolled up my sleeves and went marching over to lend a hand when I heard the voice of wisdom from above: “Do not touch that seal!” 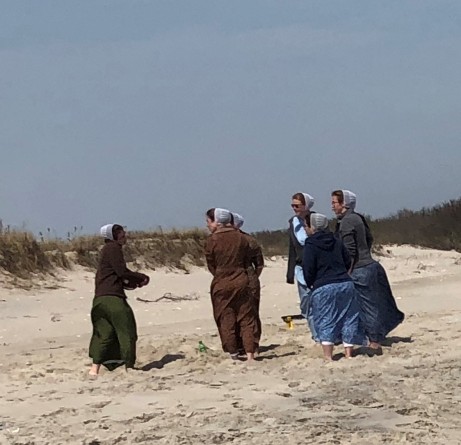 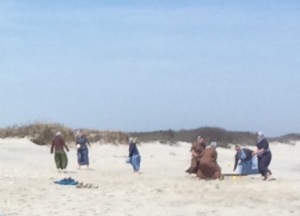 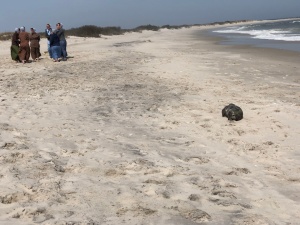 It actually wasn’t divine intervention, but my wife reminding me not to get too close to an animal in pain. I was convinced he just needed to get back into the water and she looked at me like I was crazy and said “What do you think there’s an underwater emergency room down there? Do they have seal band aids and nurses to take care of him? It obviously needs medical attention – Leave it alone!” She’s seen one episode of National Geographic and all of a sudden she’s an expert…but in all seriousness, it would be very cool if they had seal band aids with either the animal on them or the Kissed By a Rose singer! 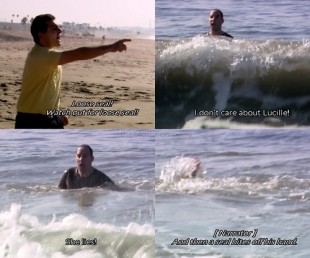 We agreed to disagree as I was convinced that all that poor seal needed was just a push to get it rolling back into the water, but quickly reminded myself that this is exactly what happened to Buster Bluth on Arrested Development when the seal bit off his hand. (Also, not the Kissed by a Rose singer, but an actual live seal). Not wanting a hook for a hand since it limits my Halloween costume choices, I looked around for a branch or piece of wood to gently press under him to start rolling him into the water when the Po Po arrived.

From one professional offering courtesy to another professional, I went over to update the officer and explain my strategy for assisting the seal when he stopped me mid-sentence and said “Do Not touch that seal – do you understand what I’m saying?” Obviously, he was very sensitive about who was actually in charge of the situation, but I didn’t want to start a fight so I deferred and let him have this one. Also, that was a big seal and I knew I wasn’t strong enough to roll his fat ass back into the water alone and no one was looking to assist me! My favorite part was how he was looking at me like I was the crazy one, yet the cult ten feet away still hadn’t stopped their game to pay any mind to him or the seal. It was as if there were Vegas odds and they stood to make a fortune the way they were so wrapped up in that game. 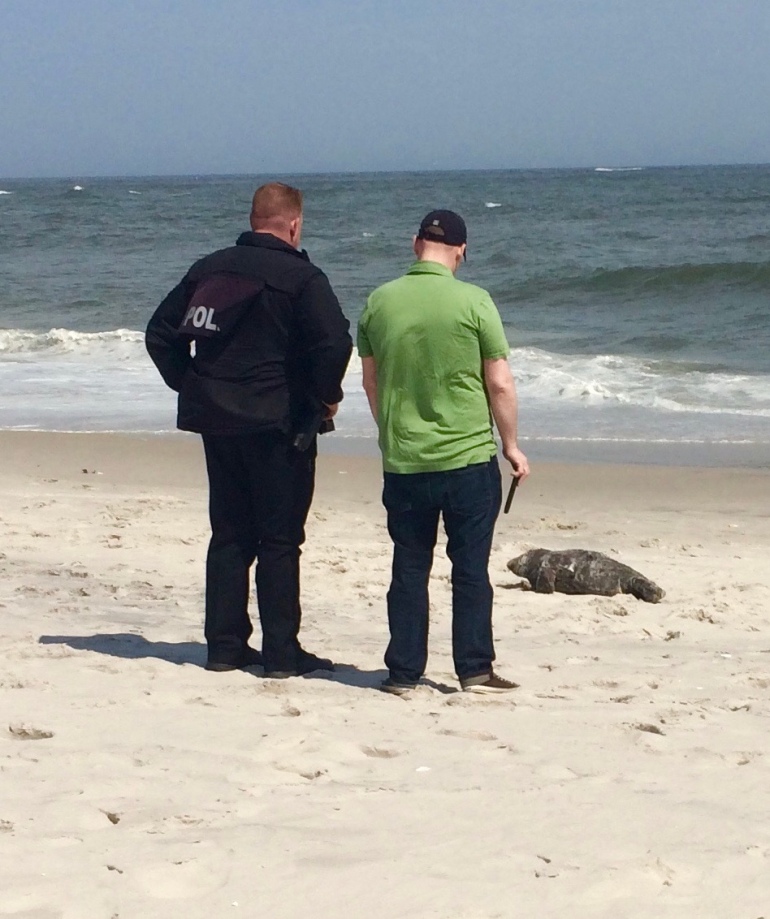 Two experts conferring on the scene…

He called animal control to pick up the seal and I left feeling satisfied that my job here was done. I actually did a double take and started looking around for the cameras because I was absolutely convinced we had just stumbled onto the set of the next season of Arrested Development. My wife, on the other hand, said she’d been to the beach thousands of times in her life and here I come rolling into the sand and it’s a shit show. After that, I just kept repeating “The sea was angry that day my friends…”and we did have a really nice weekend despite the seal and the cult members. Sometimes all you need is to seal the deal early and you’ll have a nice time after that. 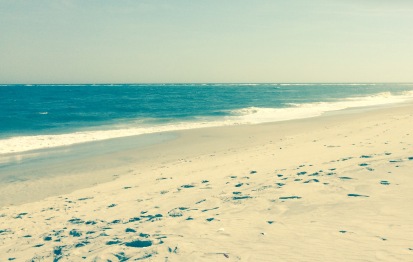 It’s kind of ironic that this happened and my Facebook profile is actually this meme I put up back in December for my sister’s birthday: 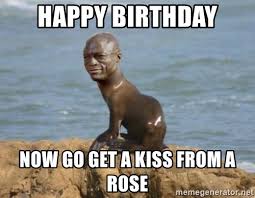