This is when that nasty bird was starting to whisper sweet nothings in my ear. Notice how calm and polite my brother’s bird is…He’s like Doctor Doolittle over there!

In case you didn’t know, I really freaking hate birds. If you’re a disciple of my Imodium Abusing cult, this isn’t news to you. If it is new, take a look at these examples of how the bird world has been systematically banding together in a worldwide avian conspiracy to torment me. This might sound paranoid if only one or two birds had come after me and tormented me, but it’s gotten to the point where I’m not even safe leaving the house. 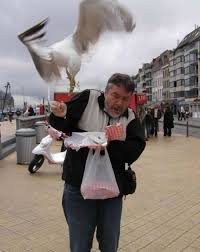 We go to Ocean City every Summer and while we were riding a surrey on the boardwalk, lo and behold – I’m under siege! I apparently can’t go a day without a filthy seagull dive bombing to try to make out with me or grab my pretzel; either way, no means no! Fast forward to my brother walking by what he thought were pretty birds and guess who wants to take a picture with them?

Notice how supportive my brother is…

He thought it would make a great keepsake to have a photo with these allegedly “nice” birds as opposed to a surfboard key chain or hermit crab like all the other tourists were getting. I was against it for obvious reasons, but was forced to relent to peer pressure from my kids. I didn’t want them to realize just how ridiculous I really am yet, and I tried to be a big sport figuring it would be over fast. I stepped up with caution and wished I could fast forward through it, but of course, I got the twenty-two year old cranky bird while my brother (AKA Doctor Doolittle) got the two-year old friendly bird.

From behind, it looks like Bernie Sanders found a new hobby taking photos with real birds instead of dealing with the crazy birds in DC!

The wrangler placed that gigantic bird on my arm and it proceeded to wrap his sharp talons around my wrist like a handcuff and then moved his head and beak so he could look me right in the eye; showing me who was boss. I was like “No fucking way Dude, get him off me” and almost threw that heavy bastard, so the wrangler thought it a better idea to mount him on my shoulder for everyone’s comfort. That would have been fine had the bird not immediately tried to bite off the tip of my tasty little ear like Mike Tyson. He was fresh and the wrangler was actually flicking his beak to get him to behave as if that wouldn’t piss him off more. He was like Chatty Cathy talking to the bird to get him to cooperate and I was like “Let’s take the God Damn picture and get it off me Dude.” 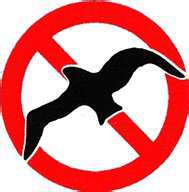 Of course my brother had the perfect bird that was like a statue – the guy should have just zoomed in and snapped it of them. This is the final shot – the only “good one” he could salvage out of all the shots he took. He actually got a kick out of my torment while my brother laughed hysterical and had my wife show him the pictures she took to laugh at.

This is the final version the wrangler took – A) Look at that bird’s grip on my shoulder – he’s not messing around! Those are clenched claws! I also was clenching in this photo, just not my claws…B) Look at my bug-eyes. I look like Joe Gatto from Impractical Jokers C) Why is his bird so calm and mine’s a lunatic?

While we were in a gift shop the next day, my kids saw some bird stuffed animals and said look – this looks like the one that tried to bite your face off and laughed hysterically as if it wasn’t a traumatic experience for me. hen they put the bird on their shoulder to do a play-by-play and reenact the whole thing and then made me do it. If my brother ever gets any more bird-brained ideas like this, I’m just gonna walk away next time before the kids can sway me. Never again folks, never again.

My kids made me relive my trauma – anything for the kids!

If you haven’t read about the bird attacks I’ve been lucky enough to make my way out of, it’s worth the read. Out of the posts I’ve put up here, the bird attacks rank pretty high in terms of searches. Random right? People search for bird attacks and find me as much as they search for mywifesmom.com, watching dirty movies with my wifes mom and rugby bulges. These crazy people are for the birds, but you gotta start somewhere…