In case you haven’t realized it yet, I take my lunch break in the afternoon and have now made a few friends that actually do it full time. As I was chatting it up with them, one of those stalker buddies said “I can’t believe you don’t want to ask for a picture with an American Idol?” (He won season 5 for those that aren’t part of the Soul Patrol which is his posse of fans and not to be confused with Paw Patrol which are just puppies that protect Adventure Bay.)

“What are you talking about? Where?”

Apparently, I was asleep at the switch again and needed a map to look over as he was just casually walking by. (He’d already gotten a picture with Taylor earlier on his way into visit the Sirius studios)

“Excuse me, would you mind taking a picture with me?” I asked and put my phone on selfie mode and he looked at me, smiled and then said “Why don’t I take it instead? I’m much taller so it’ll look better.”

OK, so no one likes a smart ass Taylor, but full disclosure (and I’m quoting the scholar Mona Lisa Vito here) you were “dead on balls accurate!” He actually is much taller than me and the picture really does look better than some of the selfies I’ve taken. OK, it looks better than pretty much all of the selfies I’ve taken even though I look like someone stole my toupee and ran off. 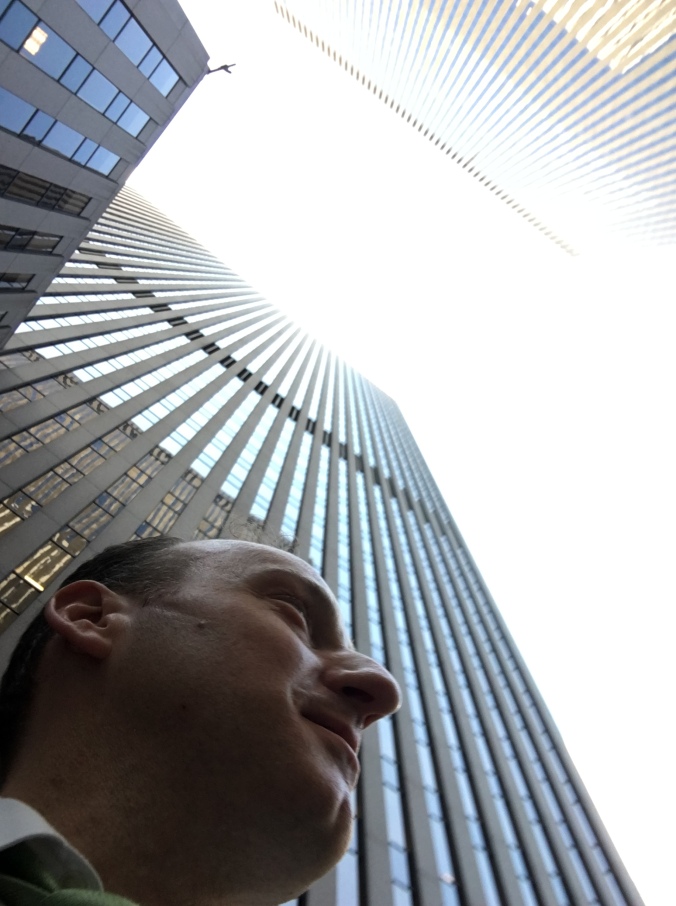 Here’s how my normal selfies look – NOT my best angle!!! I’d like to blame this on the phone, but I think it might be time for some selfie training.

This might be a new selfie strategy for me instead of carrying around a kid’s potty stool to stand on – I might just ask the taller person take the photo from now on. Granted, not everyone is as cool as Taylor was to stay and chat, but I’m gonna try. The last thing I need is for another picture to come out looking like this one of me and NBA star Jason Collins:

I mean come on – it looks like he’s babysitting me! I’m standing up nice and tall in my big boy shoes and I’m still not even nipple height!

Short apparently isn’t my only problem: one of the ladies I work with took one glance at the picture of us and said “how is it that this guy who’s full grey looks so much better? At least this picture looks better than your usual ones.” I guess it’s just the universe’s way of reminding me that being funny is a reward unto itself. Or at least that’s what I’ll say when I cry myself to sleep at night…Either way Taylor, thank you and here’s to hoping they end up making you a judge on the new American Idol reboot!

14 thoughts on “CelebriTuedays: Taylor Hicks on me he picks…”