ANN WENT WITH A DOPE AND WE SAW THE POPE!!!

When I got tickets to last week’s Papal procession through Central Park, I knew it would be a special event, not to be missed. When my friend Annie Smack That Fannie said she’d go with me, I knew it would mean we’d probably need adult supervision as she’s crazy with a capital C! We were actually debating in Central Park over which one of us crazier, but she finally conceded. After all, this is a woman that literally carries a megaphone in her car to shout out the window through said megaphone to shame and stop passing cars from texting while driving. I love her, but Homegirl’s got the deep down crazies inside of her if you know what I mean.

The thought of waiting in line for hours and then cramming into Central Park with 80,000 other people might have been a deterrent for others, but it was worth it for a chance to see The Pope. This is an amazing man that transcends religion, embraces everyone, and the world just loves him! He’s an inspiration and he doesn’t like me to tell everyone, but he also reads my blog too; who am I to argue with a man with such good taste?

We met across from Grand Central and plotted our course. This was of course after 77 texts back and forth as she braved Metro North and then risked her life by eating a steak sandwich from the food court in Grand Central. Take that in people and ponder if you will the sanity of a woman that would willingly choose to eat a steak sandwich from Grand Central, of all places, and then venture off to be locked in Central Park with 80,000 people and no access to restrooms! That is either amazing bravery or obscene insanity! Apparently, she’s got the constitution of a brick house! I know not everyone has the same stomach issues that plague me, but that’s just some crazy kind of mystery meat to be trying down there…It’s like ordering General Meow’s Chicken at the Chinese restaurant – you just don’t do it! 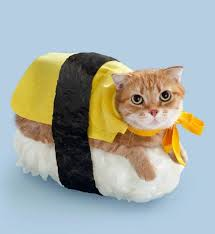 Miss Smack That Fannie likes to have single every detail of every single minute of every single day plotted out and didn’t think that I knew where we were going. I’ll defer to history being on her side with my poor directional skills and all, but I really did know where we were off to. For God’s sake, it’s Central Park. If you don’t see the entrance you’re supposed to go into, circle the block. I actually run in Central Park quite a bit because of my NYC Marathon training, so I knew where we were going. We abandoned the directions discussion once I realized that she had been dive-bombed and covered by a passing pigeon. We hadn’t even entered the line to go in and she’d already been shit on.

I can only keep replaying this priceless image of her getting bombed like Pearl Harbor in my mind as if it were a scene from my favorite DVD; it was priceless and that bird really got her. You know why? The bird also ate a steak sandwich from Grand Central causing said gastric explosion!  I don’t think I can accurately describe how much this bird unloaded onto her without a graphic, so see the picture below and contemplate because that bird was shitting for all it was worth. Sort of like when your four year old drops a dookie the size of a Teddy Ruxpin and you have no idea how so much could possibly come out of such a small little body – it was like that!

I was laughing and offered up the requisite “It’s supposed to be good luck” but when the female cop about three feet from us looked over at us with disgust, shook her head and replied “That’s not good luck – That’s just some shit on your shirt!!!” I just lost it. That was actually good luck: it was good luck that it happened to her and not me or I would have headed straight to the nearest hotel to shower and scrub my body – Pope or no Pope!!!

So now we’re outside Central Park and she’s covered in bird shit with nothing to clean it off. I had a bunch of napkins in my pocket because I had a runny nose, but didn’t want to give her any. I wasn’t being selfish, it’s just that we were gonna be in the park for a few hours at the very least and what was I going to use for my runny nose if I gave her all my napkins. I conceded and gave her two napkins because I’m a gentleman, and she did what she could to remove it from her shirt. Now as we’re walking, crazy train is clutching those filthy napkins like they’re gold bars and wouldn’t toss them away. She didn’t want to litter and there were no garbage cans for security reasons, but if there was ever a time it’s OK to litter, this was it. Finally she conceded, but I was like “you’re holding bird shit in your hand – throw that out!” Now not only did I have to worry about navigating us through the crowds, I also had to watch out that she never tried to touch me with that shit-stained hand!

As we lined up and snaked through the line to make our way to security and the metal detectors, chatty Cathy herself decided that she’d strike up conversations with about 87 people along the way. I was trying to be my usual moronic self and tried to sell her to an Indian man and then told another woman that thought we were a couple I could do better than that. We were laughing up a storm through it having a blast – even when this same couple of old ladies that were pushing through the line kept pushing people and then saying “did you just push me?” She bumped me and then Annie exposed her game to multiple people on line and eventually they ditched us and pushed up through the line. Actually almost every person that we chatted up made a run for it shortly after including the tall guy that she kept calling her tall glass of water. I’m all for boosting someone’s self-esteem too, but compared to us there are some grade school kids that tower over us so tall is subjective…

We finally made it through security almost three hours later and arrived at the metal detectors. She went through and it was fine but for some reason, my magnetic personality kept setting it off. The security guard pointed at me and waved me over to her. I went over casually knowing I’d already emptied my pockets and had nothing on me; I was expecting maybe a pat down, but who knew I’d have to turn and cough? She started out fine enough scanning my upper body, but the wand started beeping like crazy as she circled my crotch and her internal Amber alert went off. I’m not sure what she was expecting, but she proceeded to grab the waist of my pants and belt and yanked it forward. Of course, having the maturity level of a teenager – I looked her in the eye and said “That’s not where I keep my Imodium, Honey!” We all had a good laugh at that one and she sent us on our way. Usually, you have to pay to get grabbed like that in Central Park, but I guess it was my lucky day. 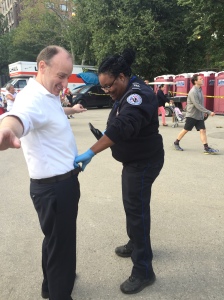 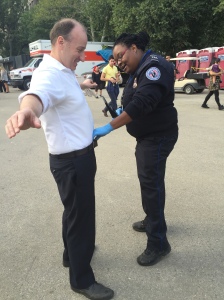 Is that an Imodium in your pocket or are you just happy to see me?

We scoured around to find the best available viewing spot and tried out a few spots before we finally found a good vantage point. This is also when Mrs. Smack That Fannie literally ventured off the path and went into a bush and pushed back branches because she thought it was a better view. I repeat, she was literally inside the bush like a sniper and thought I’d join her in there. I, of course, declined her offer and felt confident that I’d be able to see from a normal spot. Unlike the kids sitting on branches in the trees like little monkeys, I had no intention of communing with nature or risking ticks or poison ivy in the park.

The procession came and went by and was over as fast as the drive-by shitting with the bird from earlier, but it was amazing to be that close and see him. You can’t describe the experience and how cool it is to actually see The Pope. We were so lucky to get to experience something so cool and it was just such an awesome feeling!

What I have neglected to mention before now, is that I was wearing a mini Pope Doll around my neck in tribute to His Holiness. It got quite a few looks and attracted many followers. I thought for sure there’d be a ton of people wearing Pope Dolls, but I didn’t see any other one except for mine. I had gotten it at the Jersey Shore a few weeks ago in anticipation of the Papal Visit, but wasn’t sure until that morning how to properly display it. I originally planned on sewing it to my shoulder, a la an angel on my shoulder, but the hands kept messing with my hair so I clipped it to a lanyard and wore it like a necklace.

As we navigated out of the Park, there were a ton of people that wanted to take pictures of the Pope Doll, so I made Annie take their pictures with me as well. An older Spanish woman came up and just kept shaking The Pope Doll’s hand and I didn’t want to ruin it for her, but someone should have told her it was only a doll and not really The Pope’s hand she was shaking!

What good is a Pope Doll if you’re not going to bless the crowd with it? Here I am blessing a woman’s crucifix.
Annie was getting mad because she needed to rush back to Grand Central (allegedly to catch a train, but I suspect she wanted to get another sketchy steak sandwich!) and like The Pontiff, I was a man of the people wanting to stop for every single person that wanted a photo with the Pope Doll. She finally drew the line at the elderly nun passing by and wouldn’t let me take any more pictures.

Here’s us introducing AJ Ross of ABC News to The Pope Doll.

Here’s us with AJ Ross, news reporter for ABC. She was interviewing a man crying because he was so overcome with emotion after seeing The Pope, yet crazy train was trying to have the Pope Doll photobomb that poor guys interview…Even I was a little more respectful than that. 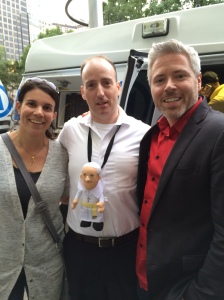 I’ll give you a shocker, we met Greg Mocker!!!

We eventually got to Grand Central to be on our way home, but what a day it was. It’s been suggested that the moral of this story is – hang out with me at your own risk. Apparently, that there should be a parental guidance warning that comes prior to spending time with me, but I think the same goes for Annie – thoughts?