The first time I broke my ankle; I had surgery and was laid up for a few weeks. Normally, when one is incapacitated, their wife comes to the rescue and plays Florence Nightingale. It involves a lot of spoiling and a little sympathy, but not this time. Apparently, when you’re clumsy and constantly getting hurt in alcohol-related injuries, it gets old real fast. 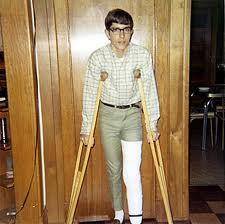 Forget the crutches, I was a sore sight to begin with!

After the surgery, I couldn’t walk at all and was laid up. My wife went back to work and little old me was kinda stranded. I am a yenta that talks non-stop 24/7 and now here I was without anyone at all. Even poor Smokey, the super Shih-Tzu, had enough and was avoiding me. I tried calling my wife at work, but she was busy. I tried calling my people at work, but they were too busy for me as well. I started ordering stuff online just so the UPS guy would come and I could have someone to talk to…

I put myself on liquid restriction to keep from having to go to the bathroom and I was starting to get dehydrated. I was so thirsty, but wouldn’t drink anything because I didn’t want to keep getting up and down to pee. When it came to eating, my wife left me a few snacks on the coffee table. I figured I would call the local pizza place for lunch and since I couldn’t move off the couch, I had my wife leave the front door slightly ajar for the delivery guy when she left for work. 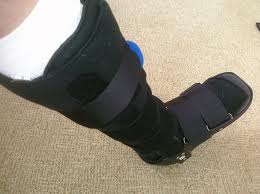 My Fancy Footwear for a while…

I called the pizza place and lo and behold, they didn’t open during the week until 3 PM. Here I am starving and no pizza…I called all around town and the only other option was to order Chinese food – which I don’t eat. Since I don’t eat chopped cats, I ordered white rice, steamed vegetables, and steamed chicken with no sauce on it. No sauce whatsoever. Plain, Plain, Plain and everything in separate containers. I actually can’t eat Chinese food at a restaurant because when I order stuff plain and steamed with no sauce without fail they always say “Oh, you try lose weight” or “Oh, you on diet?” I always have to be like “No, I don’t eat spices or cats, so I need plain white rice and no sauce whatsoever!” which usually gets them to laugh in my face again – always a crowd-pleaser, I am.

So I called the Chinese place which was open and willing to deliver, but once I ordered my white rice, steamed chicken and steamed vegetables – my order didn’t meet the fifteen dollar minimum required for delivery. I said “OK, send double white rice – you can never have enough white rice” but that still didn’t do it. Come on, how cheap is Chinese food – I mean, what does a guy have to do here? “For God’s sake – just charge me the delivery fee anyway or buy lunch for the driver or do whatever you want, but please deliver the food – I’m stranded here and I’m starving.” He laughed at me and then relented to which I was all grin on my chin. 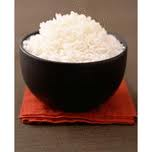 Everything’s nice when you have White Rice!

A little time goes by, and the delivery guy starts knock knock knockin on heaven’s door. I yelled from my perch “Come in” and he nudged open the door. Once he saw me looking like a poor sap sprawled out with my foot up on pillows, he gasped “What happen you foot?” Oh snap, not only did I get a lunch delivery, but I also got someone to talk to! What started there with those four little words can only be described as a beautiful and pure friendship built equally on desperation for white rice and any sort of human contact whatsoever.

Needless to say about thirty minutes goes by with me and my new friend talking up a storm. He got me silverware and napkins from the kitchen, and was the best listener ever. We agreed that since I would be laid up for a couple of weeks at least and had no other lunch options…that he would bring the usual every day and since I couldn’t meet the delivery minimum – he would bring lunch for himself as well. Everybody wins. 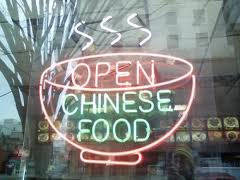 He would bring the food, walk Smokey, and then throw the garbage in the dumpster whenever he had to leave for another delivery. Thank god not that many people were getting lunch orders, because I was in heaven. We talked about my study abroad, my dog Smokey’s adventures, his family and extensively about how competitive the Chinese food industry was. I’m not even kidding – it’s hard out here for a Chinese pimp! Did you know that there are more Chinese food places than fast food places in the United States? Those bitches get cutthroat!

The best part of my recovery was that right before surgery, I’d received a shipment from Ebay of the absolute best thing in the world: I’d gotten all nine seasons of Dynasty (Need I remind you that it’s the best show ever?) I was immediately drawn back in and obsessed once again. Guess who else was sucked right in with watching Alexis and her exploits? My new friend Lee. He left for a delivery one day and he just couldn’t believe what Sammy Jo was up to. “Just you wait until season six with the Moldavian Massacre” I promised as he closed the door behind him…It was the perfect friendship. 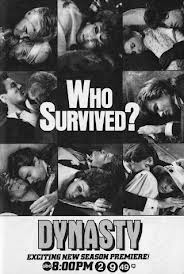 I didn’t want to rush my recovery  because I was living high on the hog, but I was able to get up and around on my crutches so the doctor cleared me to go back to work. I was sad to see my new friendship lapsing, but we’d still be ordering from that same place and we’d still see each other…

A week or two later, my wife and I ordered Chinese food and I was in the shower when it arrived. She opened the door (to my delivery friend) and he started to walk in with the food like usual. She was caught off-guard and shut the door over so it was open only a bit. He was obviously shocked and offended by this brazed act of rudeness, but she had no idea why he was trying to come in. He poked his head through the crack in the door like Jack Nicholson in The Shining and said “Tony no here??? You want me walk Smokey?” I’m not sure if she was more shocked at me or him, but she was flabbergasted, She paid him, put the food down, and then yanked open the bathroom door as I was coming out of the shower. “What’s going on with you and the Chinese delivery guy? He just tried to come in the house.”

“You didn’t let him in? What’s wrong with you?” At that point I realized that I probably should have told her about my daytime company before now but I somehow knew she wouldn’t approve…

“What’s wrong with me? He tried to come in the house!”

“He’s been in this house more than your mother has.”

“Why was he in the house and when did he walk Smokey?”

“Honey, how was the dog gonna get walked, I can’t take him. It never occurred to you that while I was bedridden there weren’t piles of shit mounting up around the house? He’s my friend; he hangs out with me when he brings our lunch…”

“What are you talking about? He eats here too? Now I can’t even order from there anymore…”

“Honey, what are you talking about? He’s gonna think we’re mad at him now if we don’t order from there anymore…”

“There’s something really wrong with you …” 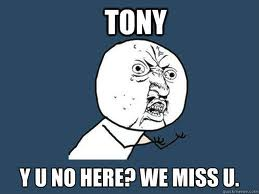 The lesson I learned is not to tell my wife when I make new friend and have them over during the day, but to make sure that I am not in the
shower when they’re coming back over again…To my delivery friend I say “We’ll always have season five of Dynasty my friend…They can’t take that away from us…” 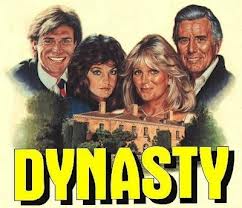 I hobbled on and off those crutches and in and out of that boot for close to two years when I broke the ankle again, but we’ll save that for another time…

My Crazy Friends, No One To Blame But Myself..., Too crazy to classify