The Legend of Dom and Tonna

If you are one of the very lucky ones and happen to be friends with me – you’ve definitely heard me talk about a friend of mine and his wife. If not – you’re in for quite a treat because they are both absolutely nuts. I firmly believe that crazy attracts crazy and even after being married for almost a hundred years, these two are still a perfect fit for each other. The networks are missing a HUGE opportunity by not following these two around with cameras. Forget the Real Housewives – these two are ready for their close-up and it’s all natural, 100% crazy!

I'd definitely Tivo a show about those two...

I shall call them Dom and Tonna for the purposes of this entry and having known each other for years, even I don’t know where to begin when talking about them. Do you start with her walking right into a glass sliding door in her house? Do you describe what they look like? Does any of it matter? Tonna is short, Italian, and is always cold. Dom is not. He is much taller and wider than her and is one of the absolute funniest bastards that I know. When I say funny, I mean HYSTERICAL like last week when he had his boss’s car towed anonymously because it was parked in a handicap spot. The boss is anything but handicapped and flipped out to say the least, but who has the balls to do that to their boss?

I call this part one because if I were to tell you all of the different stories about this dynamic duo this would be the longest post in creation, so I’ll start with my favorite Tonna story ever. And I mean ever! She was driving her car one fine day when out of nowhere, a deer ran out into the road scaring the dickens out of her. She slammed on her brakes and rammed that poor deer, propelling it onto the hood.  It shot up like a rocket with all the speed and agility of my aunt’s fat farm campers after they completely lubed up their sweaty selves with gallons of baby oil and dove down the weight room hill. I mean fast!

After the impact of the car made it airborne, that poor deer was spinning out of control and yelping as it rode up the hood. In an instant, Bambi arrived at the windshield still spinning like a pinwheel when the deer’s front hoof spun directly into the driver’s side open window and connected with Tonna’s nose. It popped her right in the chops! it got her right in the kisser like this video, I tell you! Then as quickly as it shot up, it slid off the hood and ran off into the woods. That’s the exact reason I’ll never drive with my window open or pick a fight with a deer! Forget Mark Wahlberg in The Fighter, that deer was ready to take on Sylvester Stallone as Rocky Bambi-oa!

"And in this corner Rocky Bambi-oa!"

Dom and I worked together at the time, but he worked the weekend shift and had off every Monday. Tuesday morning came and the whole team assembled for our morning meeting and our boss asked Dom about the weekend. That particular boss, Larry,  was the extreme opposite of Dom or myself; he was very low key, very professional, and did not like fooling around in the workplace. (Needless to say he hated me). You would expect a man that was so orange from cheap self-tanning lotion to, at the very least, laugh at a good joke or sarcastic comment, but with Larry that wasn’t the case at all. In two years that we worked together, I never saw Larry crack a smile once until the day that I told him that I was leaving to go to another company.

As Dom was recapping the weekend, he started to explain how he was running around like a wild man. In his dead-pan delivery, he proceeded to explain just how bad he got chub-rub on Saturday night when Larry interrupted him and mistakenly asked what Chub Rub was. Dead Silence took over the room as the twelve other people in the room and I were trying not to look at either one of them or, God forbid, laugh.  My head was about to burst from tying to hold it in and my eyes were tearing as Dom said “You know, when you’re running around all night sweating and your thighs rub together so much that the skin wears away and gets irritated from the chafing? That’s Chub Rub!” I almost peed my pants and burst out laughing but it didn’t stop Dom. “My underwear were so soaked through with sweat that when I peeled them off at home and threw them towards the hamper – they stuck to the wall. They actually stuck to the wall!”

Does this even need a caption?

Larry’s face looked like he just had bad Chinese as he picked his jaw up off the floor; he tried to tell Dom how inappropriate that was when he interjected “Imagine how I feel – they’re still stuck on the wall…” I had to leave the room or risk being fired because I couldn’t control myself any longer and I sprinted out like it was burning. No one else could get away with that kind of stuff with Larry and it was one of the funniest things I ever bore witness to. 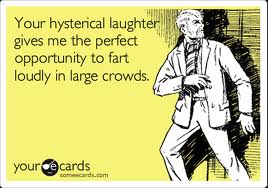 Much more to follow about these two later – like when Tonna was screaming at the Dali Lama, her famous Bomb Squad incident, when Dom shut down his favorite restaurant in town, or the time he spit his drink right into a client’s face at dinner….

Guess Who This is About, My Crazy Friends