The Legend of Weeva the Diva

My friend Weeva is recuperating from surgery, so I thought that I’d tell you a little about her so you can send lots of Imodium love her way. As a note to my other friends: Don’t go and get hospitalized so I’ll write about you too! This is a one-time only,  isolated occurrence!

Weeva and I used to work together and we always had a blast. She’s twice as old as me but three times as crazy as and ten times more fun than almost anyone else I have ever worked with. The rearview mirror in her car is about three inches shorter than the Hubble Telescope but can see just as far. She has been known to rock a neck brace for no apparent reason, created her own hands free cell phone with duct tape on her steering wheel, and she’s a Dunkin Junkie that goes there multiple times a day for her fix.

At least she isn't texting while she drives...

When I say multiple times a day, I mean it. She lives in the building across the street and is in there more than some of the employees. She reads her morning paper there and one time a homeless guy took pity on her because he thought she was homeless too when he saw her there in a paint-splattered baseball hat and sweatpants.

If you think remembering the correct lyrics to REM’s “It’s The End of the World As We Know It” is tough – try remembering Weeva’s coffee order. She gets this humungous jug filled with half coffee, a quarter espresso, one part wolf tears, two parts parsnip, a half ounce of Columbian sugar cane, two hits of patchouli extract and a drop of kerosene. That isn’t the exact combo she orders, but it’s fairly close.

I am not a coffee drinker (need I remind you of my stomach and the reason this site is called Immodiumabuser? Me drinking coffee is like someone pulling the pin off a grenade!) so I’d get tea or Diet Pepsi. One time I went and forgot my note with her secret formula scratched on it and was about to turn around and go back when I randomly thought to ask the cashier. “On the off chance, do you know how to make the weird mixture for the crazy lady I work with…?” “You mean Weeva? Of course I know what she gets” and then she made it correctly. That was when I realized exactly how much time she spends in there. 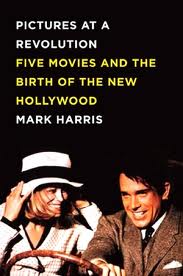 Should be required reading for any movie lover!

Our local movie theatre was showing The Graduate and having a talk and signing with the writer Mark Harris, who was there to present his brilliant book Pictures at a Revolution: Five Movies and the Birth of a New Hollywood after the screening. It was a great book (If you’re a movie lover – this is a must read!) about the back stories of the five Best Picture nominees from the 1968 Academy Awards (of which The Graduate was one) and we both love The Graduate, so it was a no brainer. Mid-way through the question and answer section, a look of realization comes over her and Weeva nudge me and says (A little bit too loudly) “Oh my God, these people here probably think I’m your Ms. Robinson!” Picture me crying with laughter.

I'm all for trying a new look Weeva, but this is ridiculous!

One day she came in with a new short do and everyone was complimenting, but I knew. The next day, her hair was three times as long and more compliments. It made me realize that I work with the most polite people in the world or the most oblivious. After Weeva walked by, I looked over and said to Christine “You know that she’s wearing a weave, right? “What makes you think that?” she replied. “Are you kidding, her hair was shorter than mine yesterday and today it’s hanging past her ass…that’s not a sign?” “Really? Are you sure?”

My favorite Weeva story happened one day while they were renovating our building. They got us pink and blue hardhats embossed with the company logo for our client appointments during the construction and no one loved their pink hardhat more than Weeva. All of the Spanish guys on the crew used to always point and giggle as she pranced around because she rocked that plastic lid like a mini Donald Trump surveying the land.

As I was sitting at my desk in my god-awful cubicle, Weeva walked up and was standing next to me as I turned around. She had on slacks and a blazer and we were chatting as Renee walked up and said “Weeva, what’s that hanging out of the back of your pants?” Weeva turned to look and there it was – half a roll of toilet paper overflowing out the back of her pants and hanging well past her knees. She ran to the restroom grabbing at the mounds of paper and it actually took a few tries before she got it all out – while we were rolling on the floor hysterical laughing.

She came out of the bathroom laughing harder than any of us were and she was mortified, but not from us seeing it. “Oh my god, I haven’t been in the bathroom for over two hours – how long has that been like that? I had a client appointment and I went to Dunkin Donuts like that! No wonder all the guys on the construction team were laughing and pointing – this time it wasn’t the hardhat!” I can still see all that paper flying by me like a tail as she ran off… 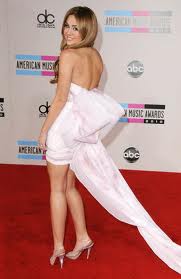 This is similar to how much paper was hanging out the back.

Weeva – you rock it like no one else can and your weave always look good! Keep it up! If Scheherazade had 1,000 tales, you are my Supreme Princess of a thousand hairpieces, get better soon and remember CYA! Always cover your ass – you never know what’s hanging out of it!