Oh Canada, how do I love thee? Let me count the ways…

Let the record show that I have a really big crush on Canada! A few weeks ago I was reminded how much I love Canada when I went to Vancouver for a Trade Show. We went to the Granville Island Public Market and look what welcomed me and my friend Jenny-J (her actual CB Handle): 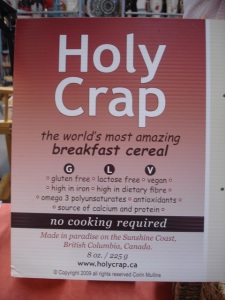 TALK ABOUT IRONIC...WHAT ARE THE ODDS?

This is cereal called Holy Crap! How random and creative and crazy and fitting!!! Of course, I got it and brought it home for my Mother-in-law. It’s a vegan cereal and I knew she’d love it since she always eats healthy. I love the name and although I’m sure it tastes good, there is no way that I would ever try it because it’s primarily made from Chia and you know that old saying “Stay away from Chia or you’ll get diarrhea!”

Chia, for the uninitiated – and I didn’t know what it was either so I googled it – is the world’s healthiest whole food and chock full of fiber so it’s literally like a stick of dynamite if you know what I mean. If you don’t know what I mean picture the last birthday party you went to where after Willy ate a few hot dogs, a cheeseburger, then had a healthy slice of Fudgie the Whale and a piece of Chocolate Cream Pie, and then ate a piece of Banana Cream Pie forcing him to miss the fireworks. He missed the fireworks because by eating all of that and essentially lighting a very short fuse, he “went to play Dig Dug in the basement”  – which is really code word for destroying the basement bathroom for forty minutes. Ring a bell? That’s Chia! Also, there is no way I’m putting anything that will make hair grow on a plaster bust of Homer Simpson in my mouth. Chia Pets might not be the same exact thing, but I’m not taking any chances! As I write this post my wife thinks it might be constructive to spread Chia on my scalp to combat my impending baldness. Isn’t it a little odd that people eat something that grows hair? Seems strange to me…but if eating Chia made my hair grow and supplemented the hard work of my thickening shampoos and Rogaine – I might just change my tune. Then you could trim my hair and use it as sprouts for your salad – Functional and healthy!

Now, whenever someone asks my Mother-in-law if I give her any crap, she can say “yes” and really mean it! I can just picture the conversation while she’s eating: “What is that you’re eating, cereal?” “No, it’s Crap.” “Come on, what are you eating – Corn Flakes?” “No, really it’s crap.”

I don’t get paid for any referrals, but if you would like to get your own bag of Crap (Holy Crap that is) check out their website Here. The owner, Corin Mullins, is super cool and this makes a great Birthday or Christmas gift! There’s also another saying that goes along with this: “Give the gift of Chia and the toilet they will see-a!”

My love for Canada first started a few years ago when my wife and I drove to Quebec City. I’d always heard that it’s such a beautiful drive but I have no idea if that’s actually true since I slept through almost the entire car ride from Westchester, NY to the Canadian border. I was awake for a small portion of the ride, but I had taken my contact lenses out so I couldn’t see anything past the dashboard and we could have been in Albuquerque for all I knew. Don’t worry, it wasn’t a B.A. Baracus from The A-Team type of situation where I was drugged in order to travel – I’m just borderline narcoleptic. Put me into a reclining position or let my head rest back and it’s lights out. Not lights out instantly like Victor, but close to it. Right as we drove across the border we stopped at a rest stop mere steps into the country. As I walked into the men’s room, what do you think I saw on the bathroom floor? (No, not a pair of “just stepped out of but still holding a huge pile of shit” Hanes blue underwear from the men’s room at Mount Fuji in Suffern, NY! Literally a pair of soiled (Soiled? More like demolished!) underwear right in front of the toilet. Someone shit their pants, stepped out of the evidence, and then went back to their table for dessert! I couldn’t eat or drink a God Damn thing in that place for fear that the owner of that pair of abandoned soiled undies might be our waiter!) Right there on the floor of that Canadian bathroom was an Imodium AD tablet staring up at me; my very own welcome Ambassador to Canada! At that very moment, I knew that Canada was the place for me! Oh Canada – you spoke to me in the only language that I could possibly understand and came right at me with that little tablet of love!

I would be remiss if I wrote about Vancouver and didn’t mention the homeless people. They might be some of the most creative and innovative marketers that I have ever encountered in my life. I will even go so far as to say that some of these people should be coming up with ad campaigns for Nike and Pepsi. Exhibit A: The man in this photo:

Now this is how you market yourself!

As my friend Ja and I were leaving dinner and heading to another bar, we approached this fellow above wearing a very dapper top hat and holding an eye-catching sign that said: Penis Enlargement Went Horribly Wrong. Spare Change for Fancy Car to Compensate.” He looked me dead in the eye and said “Dude, I just don’t want to hurt anyone anymore.” I figured this poor soul had been through enough and I reached into my pocket and gave him ten bucks. He took the money and then he stood up and got out of the wheelchair! I had to pick my jaw up from the floor and I innocently inquired “you’re not really paralyzed?” He turned back toward me and leaned in and immediately I detected a subtle hint of spearmint on his breath which really surprised me and then he whispered “Dude, I’m out here all day and my back starts to hurt – I need a good chair to sit in!” I reached back into my pocket and gave him another ten bucks – this man is a genius! Forget anyone at the Trade Show, he was the most creative guy I had seen all day. At the next corner, there was a homeless guy pounding on a mailbox with his fists and thrusting at with his hips to keep the beat of the music. Poor guy must be just starting out and looking for his angle. A little tip that I learned right there on that street – no one pays to see a homeless guy hump a mailbox.

The next night, a bunch of us went to another bar after the street party and we tore it up. I was like an inferno on the dance floor, so much so that I started grinding up on a mid-fifties Asian woman in the crowd. She was wearing an Ascot and I seductively untied it to swing it around like a flag, but I couldn’t swing it because it was so soaked with sweat that it was heavy as a sponge. After vomiting in my mouth just a little bit, I handed the scarf back to her and then she walked away only to come back seconds later with her elderly friend that I could only assume was her older sister or her mother. She put her friend’s hand in mine and said “Now it’s her turn with you” and I looked her right in the eye and then started to rock her world as I lit it up again. Another satisfied customer!

As we were leaving that bar, we saw a different homeless guy working a different angle: He was letting you kick him in the balls for 20 bucks! We looked over at this girl who took her flip-flop off and really let him have it. She had a wind up like David Beckham and he went down groaning. He must have made a hundred dollars while we were standing there, but I don’t care – there’s got to be an easier way.

Forget about the Hookers, it’s really competitive out there for the homeless guys in Vancouver! The smart ones line up near a busy Japadog truck and work the crowd. I don’t really get the Japadog thing and I actually almost threw up as my friend Heather scarfed one covered with seaweed down – I don’t know what it tastes like but it looked like shit. I mean what is really Japanese about a hot dog anyway? And who wants to eat a hot dog covered with seaweed? Is it Kosher too? Who came up with this you might ask? I’m much too lazy to look it up and I’m really not that invested or curious about finding it out, but if I had to guess – I would say that it was a homeless guy from the streets of Vancouver! Like I said – I love Canada!

Family Stories, No One To Blame But Myself...