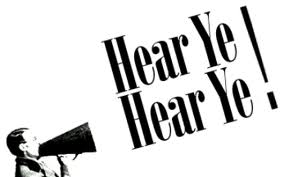 I posted this a few months ago for all the newbies – and it appears the time is ripe for it again. I’ve gotten a ton of new followers since then and I want to make them feel right at home and steer them down the right path. With so many posts on here, it’s hard to know where to start and unless you’re dedicated like Crazy-Annie-Smack-that-Fannie, you might not go back and start at the beginning to read them all…

Click here to start the ride and get caught up! 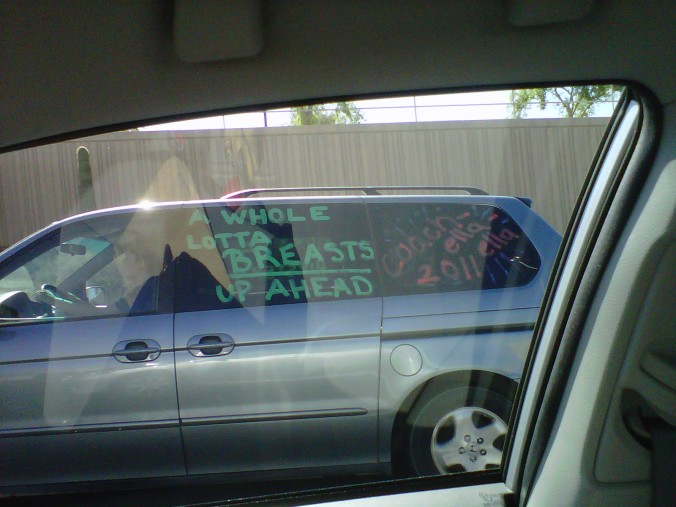 In case you can’t read this, the car window says “A WHOLE LOTTA BREASTS UP AHEAD! Who doesn’t love Coachella?

I couldn’t even escape the lunatics at the hotel bar. All of a sudden this random guy sits down cheery as can be because he has had the best sales day of his career. Apparently, he’s a paint salesman and had sold 33,000 gallons that day. He didn’t get my joke when I asked if he had to lug each paint can door to door…and then he proceeded to tell me that he was “The right guy, selling the right paint, to the right people at the right time.” I busted out laughing at that and he got annoyed because I accidentally laughed in his face.  I said “‘I’m sorry, I didn’t mean to laugh, I just thought you were kidding.” Apparently, the paint industry is very serious.  I couldn’t be that mean either because it was an airport property and there weren’t that many people in the bar. I had very limited conversation choices: it was either talk with him about paint in all it’s glory or talk to the 20ish girl tending bar who said she was trying to get something “heartfelt” for her boyfriend’s graduation at Walmart. She gave me a dirty look when I laughed out loud but I couldn’t tell if he was graduating from Walmart or what she thought might be “heartfelt” there anyway.

Start to finish, this was the worst trip I’ve ever been on. I started out almost knocking myself unconscious in the driveway when I hit my head with the trunk while trying to close it after loading luggage in which resulted in a big red gash on my forehead, I ended up delayed seven hours at various airports, getting bumped from two flights and missing a connecting flight, had a full-on anxiety attack because they didn’t send my luggage with the flight for some reason but still charged me to check the bag, then I found out that I was charged for two airline tickets instead of one and then they proceeded to tell me that it was my fault, the boxes with presentation giveaways for my clients that I had shipped to my hotel didn’t arrive on time, and did I mention the heat and the sweating?

That’s not even to talk about the old lady on the security line who was holding everything up because security had to come over. Apparently, she thought it was a good idea to bring two cans of tuna fish, a plastic squeeze bottle of mayonnaise, slices of bread, and a plastic knife in her carry-on bag. She was gonna make a little snack mid-flight. What is wrong with people that they think they can make stinky tuna sandwich on a plane? The stink alone is reason not to do it even if it was allowed – but seriously, where was she planning on draining that tuna? Why wouldn’t you make the sandwich before-hand?

After her I was at my gate (before the first delay and then de-planing) and the lady scanning the boarding passes had to call security on the guy in front of me. After being told his carry on bag was too big, he took all of his clothes out and carried them under his arm and abandoned the suitcase at her counter and tried to walk around her and board the plane with an armful of shirts, boxers, pants, and socks. She was yelling at him not to leave his bag there unattended and he tried to ignore her so she called security. I never did see him get on the plane, so who knows what happened to him after that…

Am I the only one who goes through the airport security line scanning the crowd to see who I would be friends with if we crashed onto an island like Oceanic 815 did on LOST? Obviously, I’m not looking for Kate, Hurley, or Jack, but I give the people a once-over and see who’s gonna be dead-weight if a boar comes charging at us, who’s most likely a fugitive, who has a drug problem…and It helps me realize that as crazy as I may be, there are quite a few more nuts than me!!!

NEVER LET A FRIEND REFER YOU TO A DENTIST

I’d like to tell you that as I got older, I became mature and that I got over my fears of the dentist and became a normal patient – but if I said that then that would be a lie.

I was talking about my horrible dental experiences with my friend at work one day and she told me that I had to go and see her dentist. She swore by him and said he was the most gentle dentist that she had ever been to and that she would never see another dentist besides him. It sounded too good to be true and I should have listened to my instincts.

As I walked into the waiting room, already glistening with beads of sweat that were multiplying with each step, I knew something didn’t feel right. There wasn’t a receptionist at the front desk and there were no other patients in the waiting room. The actual dentist came out of a back room and checked me in and I felt like I was in an abandoned house. After filling out the paperwork, he escorted me to his exam room and sat me down.

I tried to explain about my fears to him when he turned and walked out of the room – As I was still talking to him! He wasn’t listening to a thing I was saying. Then a random dental assistant showed up out of nowhere and put the TV on above me. I thought that was really considerate of her to think I might like to watch something to distract me until she took the remote and started strolling through the channels to find her Telenovella. As I was sitting there being ignored I started to get more and more anxious. Did you ever see a woman eight hours into labor covered with sweat and tears and dead tired and beat down from the physical and mental exhaustion? That’s exactly what I looked like sitting there. You know the wax paper that they put on the dental chair for each patient so it’s sanitary and how noisy it is every time you move? The paper under me in that chair was quiet as a mouse because it was soaking wet with the buckets of seat that were gushing out of me. If someone were to look in that window right then, they would have thought that I just ran through a fire hydrant…

I asked if we could put Days of our Lives on instead because it might calm me down a little to see what Hope was up to, but no reply. She was looking right through me and then I gave her a knowing look that I thought would say it all. Apparently, it didn’t say anything because she then gave me her own look that said “Bitch, I will stab you right here…” so I let her watch her Telenovella. I sat there wishing that I hadn’t pretended I was hard of hearing in my Spanish class and actually learned something so I could understand what was going on with Hector and his hermano.

The dentist came back into the room and I once again tried to explain my fears and tell them that I am not a good patient, but he was going about his business and still ignoring me. I figured he was in charge, so I asked him about changing the channel to Days of our Lives. I told him that I thought it might calm me down, but he said “No – she watches her show every day.” I almost asked if she had ever heard of a fucking TiVo, but then thought better of it because I was not making any friends in this office and I was pretty sure that I was already off their Christmas card list. I was fidgeting as I always do and they were exchanging looks at each other. He tried to start the exam again, but I would make him stop every few seconds to reassure me that he wouldn’t hurt me. After about the fifth time, he got mad and took off his rubber gloves.

That’s it” he said “I’m done.” Before I could even say one word or express my shock at what was going on, he started in on me. “You need to call your insurance company and find another dentist.” What?” was all I could say and he went on. “It’s not gonna work out for you here.” And just like that he broke up with me. What dentist throws someone out? As I tried to hide my embarrassment and get my jacket and stuff together to get the hell out of there, he then told me that I owed him $5.00 for the copay. “What?” “You owe me $5.00 for the copay.” “Oh, I forgot my wallet, sorry” and I walked out.

My wife had an appointment with that idiot the following week and I made sure to tell her how I had been treated and how she shouldn’t go to him. She didn’t want to look for another dentist and she had never had a problem at a dentist before so she still went. I told her that under no circumstances was she to give him that $5.00 copay if he brought it up. It wasn’t the money, it was the principle.

Don’t you know that the second that she walked into that office, he asked her if she was going to be a crybaby like her husband and then told her that I left and didn’t pay my copay? AND SHE GAVE HIM THE MONEY! Where is her loyalty? That man treats me bad, throws me out, and then talks shit about me and she gave him the copay!   She said she didn’t want him taking it out on her if she refused to give him the copay, but what would Tammy Wynette have done – Stand by your man and get a new dentist. I see how it is.