Cha Cha from the movie Grease died last week which made me think about when I was younger and still had delusions of grandeur that I was going straight from college to Broadway and then directly to Hollywood. I was in a few productions here and there and (like the ladies said) – I had big parts. More often than not, it was smaller roles and one-liners, but believe it or not – I was also cast in a few musicals. If you know me or have heard my voice on the audio posts  I’ve dropped here, you’re probably just as surprised as I was. I might revisit some of the other productions I was in at another time, but in honor of Annette Charles, this week I’ll tell you about two of my experiences when I was in two dramatically different versions of Grease. 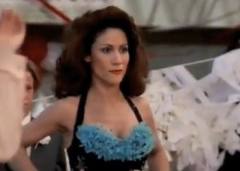 In my college production I was cast as Vince Fontaine. He’s the smarmy DJ that flirts with Marty at the dance and the director wanted to find me a costume that would be over the top and I knew just where to look. My aunt at the Fat Camp was a little bit of an eccentric when it came to clothing and no one had more “character” or randomly odd pieces in their everyday wardrobe than her. It may seem weird to go through a woman’s closet looking for a man’s costume – but you don’t know my aunt.

After a quick scan through her closest, I immediately honed in on her green, leopard print (almost snakeskin looking) business suit. I know exactly what you’re thinking and I was thinking it too – would it be too hot to wear wool under those bright stage lights? I figured it was better to show her than ask her, so I slipped it on and headed towards the kitchen to find her. Her response was a mixture of two parts disgust and one part confusion that I had chosen a black shoe and not the “appropriately matching brown shoes” because she felt like a brown would work better on me. Other women might be concerned if their nephew came home from college for the weekend and started trying on her clothing, but the only thing my aunt was concerned with was the proper pants-shoes coordination.

It’s odd that she would only mention the shoes as her concern because when you remove her big heels and hairpieces, I look like Wilt Chamberlain standing next to her. To say that the suit was a little ill-fitting was an understatement. By ill-fitting, I mean that because of our height difference, her pants were so short on me that they made me look like a lederhosen-clad Hummel figurine.  The short pants were quickly kicked to the curb, but oddly enough the jacket was an almost perfect fit which was strange since my aunt had about forty pounds on me. In my opinion, the jacket’s shoulder pads really did give my build a little definition and needless to say, one look and the director loved it. 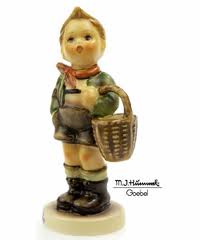 This is about how short her pants were on me...

During the school dance scene, the stage directions were for me and Crista (the girl that played Marty) to stand off to the side, towards the edge of the stage, and pretend to make out. Of course, me being the immature ass that I am, I kept lifting the red ruffles on the back of her dress while grabbing for a seat at the same time. She is a really cool girl and didn’t care about it during rehearsals, but come opening night, she said that I couldn’t grab her ass or lift her dress because her parents, grandparents, and whole family would be sitting there in the front row not even three feet from us. She stressed this to let me know that she was serious and I am a gentleman and totally understood where she was coming from, and told her that I wouldn’t do it. 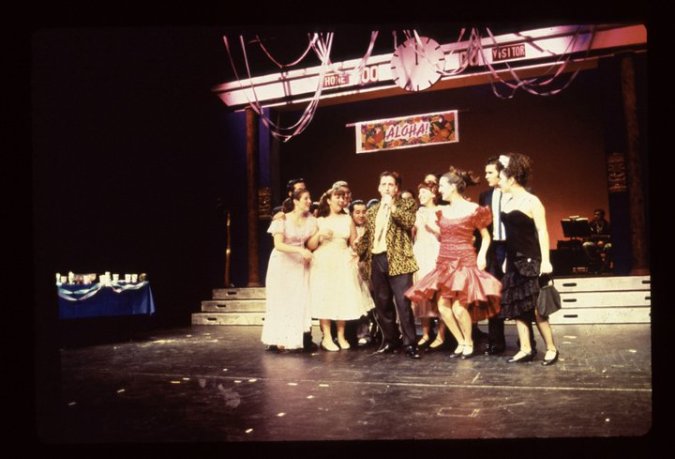 I often joke around, but this is actually me from that version of Grease.

To me, being a dedicated thespian means truly being “in” the scene, so on opening night, I was “in” the scene. I told her I wouldn’t do it, but I felt like that might be cheating the audience in some way so when it came time, I lifted her dress, grabbed her ass, and then didn’t fake it – I slipped her the tongue! This was not how the rehearsals went, but I thought it might make her reaction to it more authentic if I surprised her and basically, I was immature. I was thinking that I was so funny and that she’d get a kick out of it, but when I slipped her the tongue (And just in case I never said it to you back then: You’re welcome Crista) a not so funny thing happened. Karma!

Her surprised response to my uninvited cat-burglarish tongue being thrust upon her: She gasped and exhaled out through her nose thrusting a disgusting snot loogie right out of her nostril and onto my cheek with the force of a small Jedi Knight. Talk about ruining a moment…I was violated. I mean, call me crazy, but here I was committing to the scene and my character and look what happens; in no version of Grease that you’ve ever seen was there Snot-ilogical warfare…Obviously, I deserved it in some way and was lucky she didn’t pop me right in the chops, but after the assault I missed a part of another scene because I was in the bathroom scrubbing the skin off my face leaving my cheek red as a smacked ass to get that boogie off me. She told me afterwards that she didn’t do it on purpose and I’d like to hope that it wasn’t intentional – I mean what kind of sick individual has boogers locked and loaded as an alarm system in case someone tries to break in, but who knows?

I see a bright future on the stage for you my dear...

As hard as it is to believe that my stupidity would almost disrupt one production of Grease, read later this week about how I ruined another production of Grease outright. A little hint to tide you over until then: No, there’s not a boogie in sight but it does involve stunt work, partial nudity, and yes, of course – Fat Camp!

3 thoughts on “My days in Grease Part One: CRISTA – I WISH THAT WOULD HAVE MISSED-A MY FACE!”